We were able to make a last minute escape to Nova Scotia this past April and since the opportunity was there I wanted to make a couple of stops on the way back home to Ontario. I was on the fence about making the detour to Prince Edward Island but I am so grateful that we did.

I took a leap and booked a room at Dalvay-by-the Sea. It’s long been a dream of mine to be a guest at the “White Sands”.

As a child our family watched Road to Avonlea regularly and I know Anne of Green Gables word for word. We checked it out many years ago but in the middle of August it was fully booked. My husband and I drove to Dalvay a few years ago as well but it was in April, before their season starts.

I’d shown Isaac a picture of the hotel online and he was most excited about…the chairs. We crossed the Confederation Bridge and the first thing that stood out for me was how tidy the island is and the pride that people take in their homes and properties. The yards were neatly manicured and the houses were colourful and well maintained. After an hour or so of driving, we pulled into Dalvay. I still couldn’t believe that we were staying here and completely geeked out.

We checked in and were given our key – yes folks, and actual key- to room number 9. I’d recommend requesting this room if you can. We found a plate of cookies waiting and milk was delivered shortly after. There were 2 super comfy queen beds, two wing back chairs, coat closet, bathroom, little balcony and stunning views. They had a pack-n-play set up in the room for Maddie which was helpful. There were also two bottles of raspberry cordial on the table. Isaac was a little heavy handed with the bottle, got a little wild and broke a glass. Whoops! That cordial will get you every time.

We headed to the dining room for dinner. They had a kids menu and maybe more importantly, ketchup. The kids enjoyed their grilled cheese and chicken fingers. They came with a side of fried potato slices. These had a taste and crunch similar to Miss Vickie’s chips but better somehow. I had the scallops. My goodness, these scallops. We very rarely enjoy fine dining so I treated myself. I have no words for how delectable it was. I’ll attach a picture, which won’t do justice. Admittedly, I was nervous dining with my kids at such an upscale place but they were pretty well behaved and it was so sweet to watch them practice their “fancy manners”. 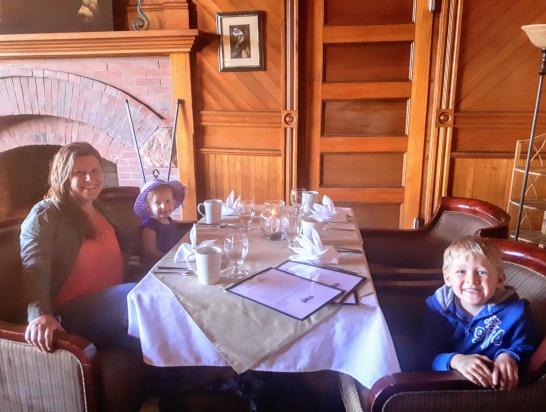 After dinner we went to the lawn to burn off some energy. The kids ran and ran. They pretended to fish, to be on a safari and had jumping races. They were getting tired and I’d already seen bedtime tick by. This is where things get equally frustrating and sweet.

Along our journey I had managed to misplace my credit card. I had assumed it was under my car seat because well, that’s just the kind of person I am. When we were checking in I still couldn’t put my hands on it but we were able to get checked in and up to our room. Small panic. After checking out the room I tore through my car trying to spot it. Slightly more panic. Maybe, just maybe it was in our suitcase. I emptied out our bags. No luck. By now I had enlisted my son as our detective and made it a game. Still nothing. We were done playing on the lawn, it was now dark and I was dragging the kids out to the car one last time to look. Leah, who was working the front desk mentioned that she would watch them for a few minutes while I ran out. Normally I would have said “No, that’s fine” but I was only a few minutes and I was just outside the door. There were no more nooks or crannies that the card could be hiding in so I had decided to call and cancel the card after the kids were asleep. Bummer. As I come back through the doors, I found Leah along with both kids, sitting on the sofa in front of the fire reading an Anne of Green Gables storybook. My heart almost burst. My kids, on PEI being introduced to Anne of Green Gables at The White Sands Dalvay-by-the-Sea. All the moment needed was Gus Pike playing the fiddle outside the door and Simon Tremain stomping through. We went back up to our room and as I tucked the kids in to bed Isaac spotted it. There lay the card under the bed, camouflaged as it was the exact same colour as the carpet. All in all a great end to the day.

For breakfast Maddie wore her fanciest dress and hat, along with her rubber boots of course. The kids were made special pancakes which they devoured. The coffee was just right. It’d been quite a while since I’d had a really good cup of coffee so I doubled down, had another and grabbed one for the road.

We checked out and on the advice of the Manager, Joel, we headed to Brackley Beach which, along with Dalvay is located inside PEI National Park. Despite the wind which didn’t even faze the kids, we played for an hour and then struck out for Green Gables.

We toured the house. Since the kids don’t totally get the Anne thing we made it into an education on how people lived at the turn of the century. We discussed things like cooking on a wood stove and life without a refrigerator. We hiked the trail behind the house. This was the “Haunted Woods”. The trail was well maintained and an easy walk for the kids. Isaac was a little freaked out by the “Haunted” bit but after explaining that it was “enchanted” he decided to grab a stick and become a magician.

Then, just like that our Island escape was over. On the drive to the bridge we spotted a water park, go carts, toy factory, COWS ice cream shops and so many other places to check out once the summer season starts up. Traveling during shoulder season means many attractions are still closed but the crowds are non-existent and there wasn’t a tour bus in sight, which is highly prized for us. I can’t wait to go back to the Island for a longer stay in the summer time. In the meantime I’ll keep watching the new Anne series and keep an eye out for the White Sands. 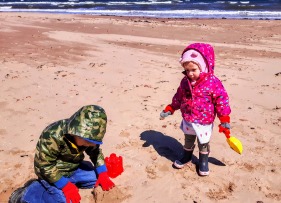 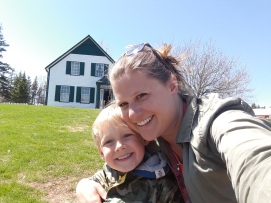 One thought on “Springtime in PEI: Province of Endless Imagination”