It was the end of July and we were deep into the dog days of summer. Our original summer plans were rescheduled and we were getting antsy to strike out and find some adventure. I pulled out the Google box and started to search for somewhere to explore with the kids. I came across the town of St. Andrews in New Brunswick which billed itself as “Canada’s Premier Seaside Resort”. After perusing their site I quickly decided that this is where we would go. It was only 13 hours from our door and seemed super family friendly.

The activities we decided on were The Huntsman Aquarium, beach combing and whale watching aboard the tall ship “The Jolly Breeze”. Finding last minute accommodations in St. Andrews was a totally different story. We were however, finally able to secure a room at the Greenside Motel.

We struck out early on a Wednesday morning and after making a few extra stops along the way, arrived in town around 9:30 that night. We checked in and received the key-yes, an actual key-to our room. New owners took over a couple years ago and the amount of work they’ve done is evident. I think in another year or two this place will be great little spot. There was a kitchenette complete with pots, pans, coffee maker, microwave, mini fridge, hot plate and toaster oven. We found a queen size bed waiting for us. We snuggled in and fell asleep. We were up early and ready to roll. As I was packing up our stuff I heard a loud “POP”! I ran to the kitchen and found that Maddie had somehow managed to microwave our toothpaste. Yup. That happened. We narrowly averted an emergency, packed the car and skedaddled outta there.

Bonus: The Motel gave the kids both a full size pack of gum upon checkout.
Bonus Bonus: They ate it and didn’t stick it to the car seats or in their hair. 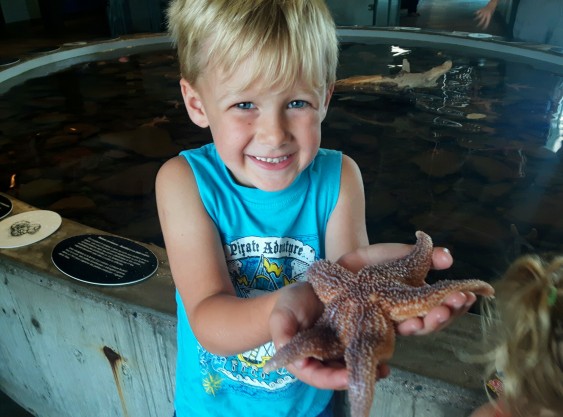 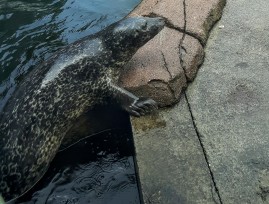 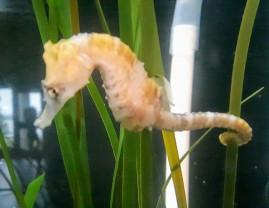 The first stop was of course the Tim Hortons across the road. They scarfed down their breakfast and I adequately caffeinated. We headed over to the Huntsman Aquarium. The road leading into it is currently under construction. I asked one of the guys directing traffic which way to the aquarium. He looked at me strangely and pointed to the giant building, literally right in front of us. Whoops. We arrived just in time to see the seal feeding. There was a small crowd though, so we couldn’t really get a good view. We watched a few minutes then went to check out the giant touch tanks. This, my friends, was a huge win! Both kids loved every second of it. Isaac was full of questions and the ladies working there were so kind to him and answered every single question in a way that he could understand. The water is pumped into the tanks from the bay and has a 95% recycle rate. There were starfish, sand dollars, lobsters, skate fish, urchins, crabs, flounder, sea cucumbers, clams and I’m sure there were more that I didn’t see. With each creature we picked up we discussed what they felt like, what they looked like, what they ate and what ate them. The skate fish were really interesting. We could feel them as they’d glide by. They’d also stick themselves to the glass and their underside looks like a smiley face. If you go, please remember not to pick them up. Staff had to tell the same 3 people about 5 times to stop. Downstairs we found lots of other fish including my personal favourite, sea horses. There were wall-sized aquariums with schools of fish swimming around and lots of other creatures. There are also lots of games and a model fishing boat that the kids can play in. There is a secret area behind a door to go see other sea animals that aren’t on exhibit. There was an additional fee for this though and since I wasn’t 100% sure whether it would be worth it we didn’t venture in. We will next time, because there will certainly be a next time. As soon as we drove away they were asking when we could come back.

We went for a drive downtown to find something to grab for lunch. We wandered into Olde Tyme Pizza and ordered some giant slices and drinks. I drove to a rock beach with picnic tables to enjoy our slices. I then let the kids loose on the beach to look for treasure. Isaac is convinced that he found a dinosaur head fossil and Maddie filled my pockets with shells and stones. 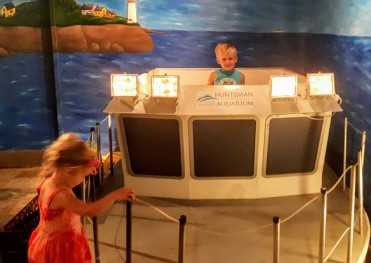 They played, ran and treasure hunted until it was time to go whale watching. We’d been excited for this since we booked it.

I’d go back to St. Andrews tomorrow with my kids. The whole town seemed family friendly and oh so charming. I’ll definitely plan to stay at least 3 nights as there is so much to see and do.