We took advantage of one of the first warm and sunny days of the year and ventured out to Maple Fest at McLean Berry Farm in Buckhorn, Ontario. The sun, nature and exercise are exactly what our family needed after a long winter. While we have managed to spend more time outdoors this year, I’ll still be pretty happy to give the old man Winter the old heave ho. 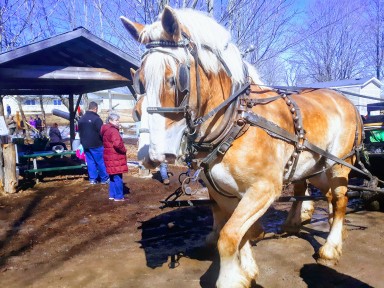 We took two cars. I drove in first and then realized that we were to pay upon entering the lot. $24/family. Cash. I had about $3.80 in cold, hard cash. Whoops. Luckily, Ed had the forethought to recognize that we would likely need it and saved the day. There is a chip truck onsite with an ATM as well as a store with a debit machine so I’m sure we would have been able to pay one way or another. We were given a scavenger hunt to fill out and were on our way.

We were waiting for a couple of minutes in line for the horse-powered hay wagon but it turned out it was the horse’s break time. There was a tractor pulling the hay wagon but we decided to hike down to the Sugar Shack and take the horse drawn wagon back at the end.

At the Sugar Shack we found out all about how sap is boiled in the evaporator until it becomes syrup. We learned that it takes 40 litres of sap to make 1 litre of syrup. We also discovered that the colour and darkness of the syrup is due to the point in the season when it is collected, not how long it had been boiled like I had thought. From here we meandered through a trail in the hard woods where we found lots of tapped trees with buckets to check for sap. Isaac saw it as a personal mission to check them all and since Maddie is his little shadow she followed right behind. Many of them were at kid height, but thankfully their tall big brother was there to hoist them up to check the buckets high on the trees. There are posters along the trail telling of the history of Maple Syrup in Canada. We were wondering how people discovered it in the first place and how they collected the sap. These signs answered all of our questions. In typical fashion, we accidentally did the trail backwards. If you do it properly you will wander through the woods, see the sap and then at the end of the trail will go into the sugar shack to see how to sap is boiled down which makes more sense. 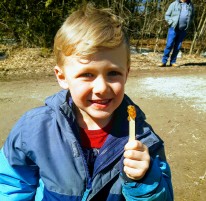 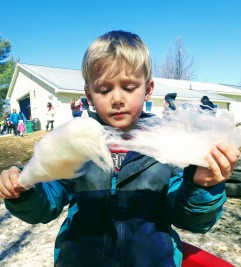 Next up was Maple Syrup Cotton Candy. Yes, that’s right – Maple Syrup Cotton Candy. I don’t really care for cotton candy but this was seriously yum! Behind that building was a little obstacle course and cedar teepee to explore. It was then time for the Maple Syrup Toffee. They fill a tray with snow, pour on hot maple sugar on and we roll it up on sticks. I would recommend staying at the back until the crowd has cleared some as little Maddie was nearly run down by excited 9 year olds which was a little too much for this mom.

We rushed right over to see the snow cannon in action. During PumpkinFest this is a pumpkin cannon but for Maple Fest, snow it is. And really, pretty much anything being blasted out of a cannon is endlessly entertaining for kids.

They also had demonstrations of sawing logs, tapping trees and rope making. They had a large supply of snowshoes to try out but since the snow is on the way out there wasn’t quite enough to test our snowshoe skills. The boys had fun with sawing the logs. After sawing off our chunks of cedar we went over to a fire where they were branded with a maple leaf. All I could hear was my Grandfather’s voice in my head, laughingly saying “My dear, people these days paying good money to saw up a log. Next they’ll be paying to jump in a puddle.” It was well worth every penny.

We waited in line and took the horse drawn hay wagon back out to the parking area. It was a wonderful day for our family and has us looking forward to the longer, sunnier and much warmer days ahead including swimming, hiking, road trips and strawberry picking in Buckhorn.

If you are looking to check out MapleFest, next weekend (March 25 & 26) is the final weekend for this year.