This past Christmas we gave our kids a trip to Great Wolf Lodge in Niagara Falls instead of a gaggle of gifts. Christmas morning arrived and they were delighted with their small gifts and started planning what they were going to do first when we got to the water park. Every morning Isaac would come roaring into our room, screaming the number of days left on the countdown.

The day finally arrived and we struck out bright and early so we could cram in as much time in the water park as possible. We checked in and strapped on our fancy dancy bracelets.

The bracelets are multipurpose. They act as room key and the adults bracelets are connected to your credit card info so you don’t have to carry around you wallet.

You can use the water park before your room is ready, so pack your swimsuits and towels in a quickly accessible bag. We were meeting friends there and they had rented a locker so we were able to put our boots and coats in there. We’ve never rented a locker before though and have left our faith in humanity not to steal our gear, and thus far, humanity has prevailed. Maddie braved the “Wooly Mammoth” slide this year, which is a slide with a giant tube that the whole family can go on. She hated it so much that I think that if she ever sees it again it will be too soon. She spent the rest of her water park time in the kiddie section which was perfect for her with 4 slides, basketball nets and various water installations. Isaac loved the Squirrel & Falls slides which are twisty and fast. I convinced him to go on the Canada Vortex a few times which is a tube ride for 2 that I love. Isaac liked it, but for him, it didn’t hold a candle to the other two. 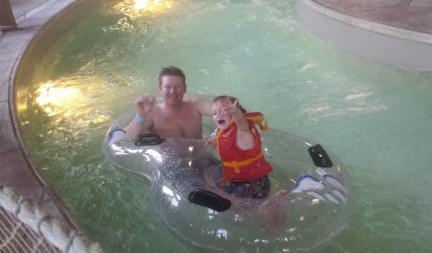 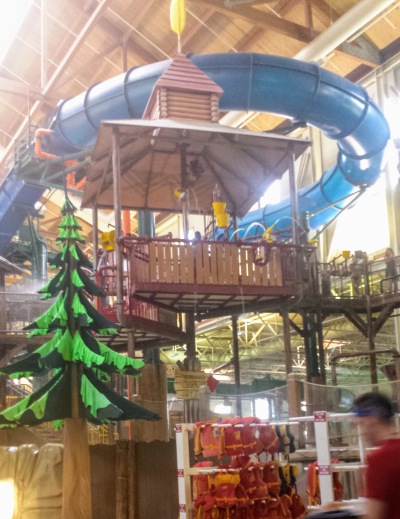 After a few hours we received the email telling us that our room was ready. We had booked the Kid Camp room which has tent-style room with bunkbeds, a wee little desk and a TV for the kiddos. Separate from that we had a queen bed, a pull out sofa, tv, mini-fridge and a balcony.

We invested in the MagiQuest wand and game this year. Luckily our friend’s oldest son was there to figure out the game and explain it to the younger ones because my hubby and I are about as techie as a kitchen chair. From what I gather you embark on these “quests”, sort of like scavenger hunts, that consist of riddles sending you throughout the lodge opening up treasure chests, lighting up crystals and paintings on the wall. This seems to be a hit with a lot of people. We encountered one woman who had an entire outfit dedicated to the game and has apparently been doing it for years.

If you are planning on getting the wand, definitely opt for the Paw Pass. The wand alone, along with the topper for it came to $60. The Paw Pass is $69.99 and includes a bunch of activities that you’re likely to do anyway like bowling, a set of wolf ears and a stuffing station animal.

We opt for the Breakfast buffet. It was $40 per day for our room. We’re big breakfast people and have always been full by the time we leave. They have an omelet station, fresh fruit, yogurt, oatmeal, French toast, pancakes, ham, an assortment of yummy egg dishes, cereal – and that’s just the stuff we devoured. There is certainly something for everyone to fill up on, even my picky 6 year old. We brought sandwich fixin’s, fruit, milk, crackers and other snackies to keep in the room for lunch. For supper each night we ordered pizza from downstairs. It was around $17 and enough to fill us all up with a few slices to spare. I also ordered the “loaded potatoes” which to my disappointment were decidedly unloaded. The snack foods in the bakery are too much to resist. We had chocolate covered strawberries, Oreo cheesecake (twice), chocolate covered marshmallows and cookies.

The kiddie-casino, er, arcade is a hit with every single kid. The points to play are loaded onto a card to swipe at the games instead of carting around bags of quarters. Points are awarded onto the card at each game and can be redeemed at the counter for various toys and trinkets. Since Christmas morning, Isaac and Maddie had been working little jobs to save up their arcade cash. It was burning a Jupiter sized hole in their pocket and they asked to go to the arcade the second we left the water park.

We did the bowling on our last day there. The lanes are shorter than a standard bowling lane so the kids love it. It’s fairly pricey at $5 per person/per game, but we got a pizza and bowling package so it wasn’t as steep. 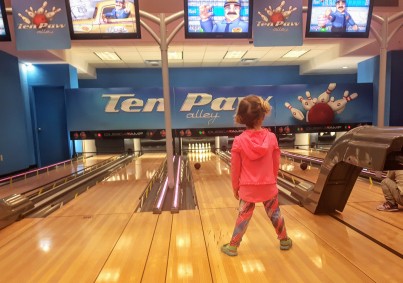 I was hoping to check out the Scoops Spa for a pedicure with Maddie this year but didn’t get the chance. Something to look forward to for next year.

The coffee at the shop in the lobby is just strong enough to jolt me to life after being awoken at 5 by two crazy kids that are desperate to hit the slides. This is also where you can distinguish the parents on day 1 from the parents on day 3. Day 1 parents are dressed in clothes that make sense, hair brushed, shoes on, a glimmer in their eyes and are ready to take on the day. Day 3 parents are in their jammies, serious bedhead, are wearing a single sock and with a vacant stare just mouth the words “coffee” to the barista.

We were able to stay for a third night but switched to a standard room to save money. There were two queen beds and a pull-out couch. The kids begged to sleep on the pullout, because “Whoa! Mom! Mom! Mom! Watch this! The couch IS a bed.” I wish that we still got that excited about a pull out.

We look forward to our little Great Wolf Lodge getaway every year. There’s something extra fun about a water park in the dead of winter, plus it’s when they have the best deals. You could absolutely do Great Wolf Lodge for just the price of the room. Bring your own food to keep in the mini fridge. There is so much included to keep your littles busy like the water park, story time, dance party and yoga. Just be prepared to say “no” quite a bit. 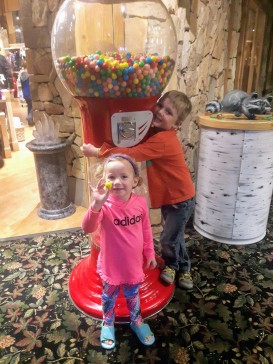 Quick Tips:
1. Wednesday was the least busy
2. The best deals are to be had in December (for the January stay)
3. Get to story time early to get a good seat
4. If there is availability they will offer you an additional night at a great discount

Very important side note: While our husbands and kids were having some downtime in the rooms my friend and I snuck away for some girl time. We ordered a couple margaritas from the bar by the wave pool and Oh. My. Goodness. It was far and away the best margarita I’ve ever had. If you like margaritas, even just a little, order one up…Wolf strength.