Basic French for Traveling Through Quebec (and a couple fun facts)

Quebec is one of the most beautiful provinces in Canada.  They’ve got it all.  Beautiful lakes, mountains (magnificent ski hills!), vast forests, the St. Lawrence River and the Atlantic Ocean.  It can be a little tricky however for the Anglophones among us to communicate since 80% of the population speak French.  In the major centres such as Quebec City (AMAZING, GO THERE!!) and parts Montreal and at truck stops such as Irving Big Stops there are many bilingual folks, but outside of that you’d better brush up on your high school French to get by.  Even if the people with whom you are speaking are somewhat bilingual it is respectful to at least attempt to speak their language.  You wouldn’t appreciate someone coming into your workplace expecting you to speak a completely different language, and neither do they.  Below are some terms to get you though, especially while travelling with kids.  (See: Chicken McNugget Happy Meal Please)

Do you speak English?: Parlez-vous anglais

Where is the rest room?:   Où sont les toilettes?

Do you have a room available?: Est-ce que vous une chambre disponible?

How much does it cost? – C’est combien?

Have a good day! – Bonne journée!

If you are travelling through Quebec and are not planning on stopping in Montreal take the Bypass.  It’s a toll highway that is worth its weight in Chocolate Chip Cookies.  Driving through Montreal can be a little ridiculous.  The roads are generally in rough shape and traffic, traffic, traffic.  If travelling West to East you will enter the bypass highway not too far into Quebec and it takes you quite a ways past Montreal.  Kid Bonus:  There are a few huge bridges along the bypass.  If you miss the bypass for whatever reason, you will go through Montreal.  Montreal Kid Bonus: The tunnel!  The tunnel was my favourite part as a kid.  It’s long and goes underneath the St. Lawrence River.  Amazing.

Also, Contrary to popular belief you CAN turn right on a red light in Quebec EXCEPT in Montreal and where it is explicitly posted that you may not.

Quebec is a province with a beautiful and rich history.  We’ve been to Old Quebec City many times.  Travelling through Quebec can be a great learning experience for the kids. Here are some fun facts:

Québec City is the only walled city north of Mexico

The province of Quebec is Canada’s greatest producer of maple syrup.  Mmmmmmmm…

Quebec’s forest covers more than 750,000 km2, which is the size of Sweden and Norway together? It represents 20% of the Canadian forests and 2% of the world’s forests.

Montreal is home to the famous Cirque du Soleil

After Paris, the world’s largest French speaking city is Montreal

The Montreal Canadiens are the NHL’s oldest hockey club, founded on Dec. 4, 1909 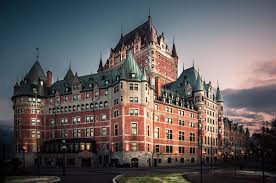