My favourite place to travel with my kids is to Nova Scotia.  Mainly because I have some pretty great family there.  Then again, almost everyone I’ve met there is pretty great.  Last summer I drove out alone with my kids.  My hubby does road construction so time off in the summer is a definite “When the Leaf’s win the cup, you can go.”  For non-hockey followers, that’s a big, fat no.  So off we went.  When travelling from Southern Ontario, the middle point is around Edmundston or Fredericton.  We always stop at the same hotel; the Days Inn Edmundston.  It’s right off the highway, the staff are friendly and accommodating, the rooms are clean and the “continental” breakfast is varied and just what we need to start day 2 of travelling.  It runs about $80-$100/night.  I’ve booked through a couple different websites but have found the way to get the best price is to call the hotel directly.  Bonus:  They have some of the most, errrrr, unique décor I’ve seen in a hotel.  Dolls in frames, small suits of armour, antique prams, a small peddle car used as a planter.  Some find the dolls in frames a little strange, but I would be upset to discover they were gone on our next stay.  Will have a crib in the room waiting for you if you request it.

There are many great, family-friendly things to do in Nova Scotia.

The kids and I were also there in the Spring (off season!) and I used Hotwire to book rooms a few times.  We were always thrilled with what we got.  The first and third time we were booked in at the Westin Nova Scotian.  It’s an older, but elegant hotel.  The service was wonderful.  The lobby has a café in the morning that transforms relaxing bar in the evening where business-type folks were holed up with their power-suits, laptops and briefcases.  There were wonderful lobby musicians as well.  My little guy danced and danced and danced to the beautiful music which was different every day, and he requested to go back down and check it out several times.  We paid around $90 both times.  It is of course a bit of a risk booking though a service like Hotwire as you don’t really know where you’ll be booked into until you’ve paid.  They will bring you a crib upon request.  As we booked through Hotwire, I needed to contact the hotel directly to ensure a room with space for a crib/pack-n-play and if available, two beds.

The second time we booked with Hotwire I was thrilled to be booked into the Halifax Marriott Harbourfront Hotel.  This is a hotel which I’ve always wanted to stay in but that regularly would’ve never been within our budget.  The hotel is located on the harbour.  We didn’t get a harbour view room, but our view was great anyway.  The lobby is very large and (to me anyway) luxurious.  There is a fun looking hotel restaurant, but as we were travelling on a budget, we didn’t venture in.  The staff were out of this world.  I had Maddie in the stroller and Isaac beside me pulling his suitcase.  Several employees asked me if I’d like assistance up to my room.  The main praise however has to go to Miss Isaac at the front desk.  She had a great conversation with my little Isaac about them both having “Isaac” in their name.  She managed to make him feel so special.  I think he walked away a little taller than when we entered.  That night she sent up milk and cookies for him.  For him, and me really, it was magical.  If you have the opportunity to stay here for a decent price I would jump on it.  The crib was waiting for us in the room.  Same as above, since booking through a 3rd party website we needed to contact the hotel directly to enquire about a crib and the room type availability.

A couple years ago we stayed at the Cambridge Suites.  We booked directly through the hotel for this one.  The hotel is in a great downtown location and pretty central to many attractions. The staff were super friendly. The beds are oh so comfy! We booked the stay as we arrived in Halifax and they had the crib we required in the room for us when we arrived. The crib was fine. It was a little too far down for me as I am short, but was manageable. The rooms were spacious and decorated beautifully. I usually don’t use the toiletries in hotels, but their soap was fantastic. We would definitely return here as well.  The continental breakfast was fine, but it would be nice for it to be available past 9:30 because while on vacation it’s hard to get everyone up, ready and there by 9:00 so that we can be done by 9:30 when it ends. Also, I would suggest to pay for the parking. We tried to save a little money and park on the street but were about 10 minutes late to feed the meter and ended up with a $25 parking ticket, so the $15 for parking would have been money well spent. I would highly recommend this location!  Also the management said that they extend the continental breakfast on holidays, weekends and for the months of July and August until 10:30am from it’s usual time of 9:30am.

Now on to the fun stuff:

Maritime Museum of the Atlantic:  My name is Allison, and I love museums.  I especially love this one and have visited many times.  There is so much to take in that I discover something new every time.  They’ve got a very informative Titanic exhibit with examples of 1st, 2nd and Steerage class rooms and menus.  The names of the souls lost are painted along the wall.  There’s a real Titanic lounge chair behind glass with a replica one to sit in.  There is a lot of information about the Titanic and those who were travelling on her.  I love the exhibit about Sable Island, the graveyard of the Atlantic.  Sable Island is a large sand bar out at sea.  Many, many ships have wrecked while crashing into the sand bar as it was virtually invisible and it shifted.  The exhibit on the Halifax Explosion is as well put together as it is heart breaking. Embarrassingly, up until I visited this museum, all of my knowledge of the Halifax Explosion came from the “Canada: a part of our heritage” commercial.  I had no idea the thorough devastation to the city and those who inhabited it.  Those are only a few of the exhibits.  As for the kid-friendliness of it, I would give it a 5/10.  Most of the information included in the galleries and exhibits would be of more interest to adults.  I do however see that they now have a Theodore Tugboat exhibit which we would love to check out.  The gift shop is almost unbelievably well-priced so I didn’t need to have a lengthy discussion with a three year old, or meltdown about why we aren’t going to go in, because for once we actually did.

Museum of Natural History:  Dinosaurs, Dinosaurs, Dinosaurs!  Isaac had just discovered his love for dinosaurs.  They had an exhibit all about them.  Full on, animatronic dinosaurs and a large bin to dig for and brush off dinosaur bones.  I believe that it may have been temporary, but if it returns and you have a dinosaur lover, it’s a must-do!  One of Isaac’s favourite things there was the interactive, topographic sand table.  As you play with, move and shift the sand, the topography of the sand changes to show what would fill with water, or become a valley or a mountain.  Isaac of course didn’t totally understand that aspect of it but loved watching the colours change based on what he did.  They have an extensive marine exhibit with many skeletons, and of course GUS!  Gus is a 90 year old tortoise that resides at the museum. He’s been a kid favourite for decades.  Periodically throughout the day they have an information session with him.  Kids can get up close with him and even help feed him.  I almost forgot the planetarium type room.  I chose this room to feed Maddie because it was empty and pretty dark, as unfortunately, much of Nova Scotia hasn’t jumped on board yet with “breastfeeding is normal”.  It was cool to see all of the planets and the solar system come to life as it did.  Without the dinosaur exhibit, I’m not sure I’d take Isaac again, but for the low price of admission it’s a fun way to spend a couple hours.

The Boardwalk:  We loved to walk the boardwalk.  We must have walked it 50 times.  There are always big ships and smaller vessels to watch as well as a lot of action along the boardwalk itself.  There are many food stands, and quaint shops and restaurants.  There is a kid’s climber beside the Maritime Museum.

Pier 21:  This one was for me.  Definitely wouldn’t bring little kids here unless you are bringing someone to entertain them like my husband did.  Pier 21 is where many of the immigrants were brought ashore and had their paperwork processed and medical examinations done.  It is an integral part of our Canadian History but not too kid-friendly.  There are guided tours starting every half hour or so.  I chose to venture on my own and joined a tour part of the way through.  It was very informative and for the history minded tourist, it’s a great opportunity.

There are a lot of hills in Halifax so if you are planning on walking the city, bring your most comfortable shoes.  You could spend the day just walking around the harbour.  As we were usually there during the off-season, not everything was open, but the things that were usually were more inexpensive than during the height of tourist season.

Place I’m determined to visit at some point in my life: Sable Island

Pro’s:  Relatively inexpensive attractions, compact city so many things are within walking distance, kids can run up and down the boardwalk all day long, rich history

Con’s: Many hills to walk, driving downtown can be a little ridiculous

****I’ll move on down the south shore to Lunenburg and Lockeport in a later post.****

The Milk and Cookies sent up at the Marriot Harbourfront

The names of those lost aboard the Titanic 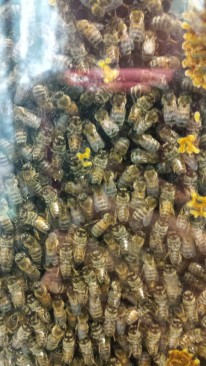 Bee Hive at the Museum of Natural History 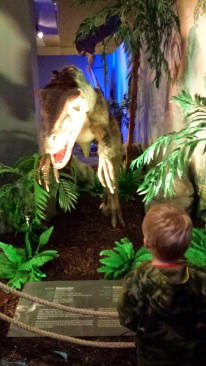 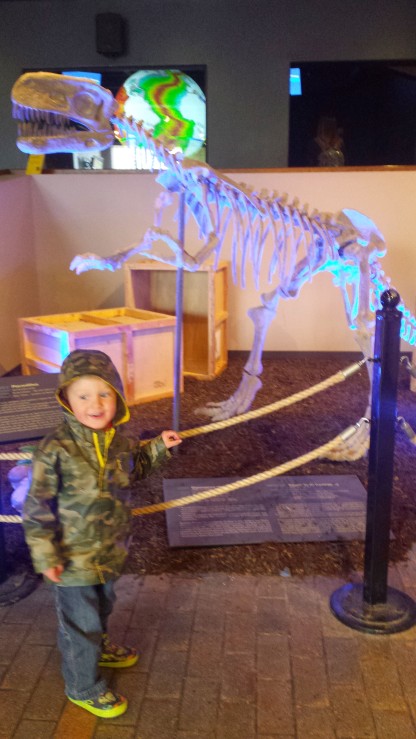 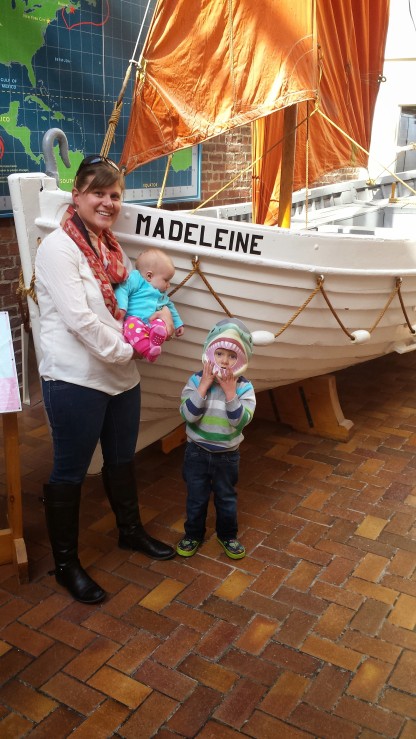 Maddie in front of her own dory and SharkMan!